Hmong New Year Celebration is part of the Seattle Center Festál series and produced in partnership with Hmong Association of Washington (HAW).

COVID-19 Protocols:
In terms of COVID requirements, Seattle Center is a City of Seattle department. Thus, we are following the guidance from the City of Seattle as well as King County Public Health. Learn about Seattle Center's health and safety protocols at our events. To protect the public, City staff and contractors are asked to be fully vaccinated.

The festival will take place in-person: Saturday, November 5, 10am-5pm (6pm-10pm for the concert) at the Armory Food & Event Hall. It is free and open to the public.

The Hmong New Year Celebration is a festival where the community gathers to celebrate the end of the harvest season. The community will adorn intricate textile clothing, perform traditional dances, feast on traditional Hmong food, and more.

Hmong Assocation of Washington (HAW)'s mission is to preserve and promote the culture, advocate for the Hmong people, and promote education in the community. They are also inspired to provide effective services and programs that improve the lives of their diverse Hmong community in WA. HAW started in 1983 to serve the Hmong American community in WA. Based on the last census in 2010, there are more than 2,400 in WA.

For thousands of years, the Hmong have maintained a distinctive culture, including dress, oral literature and religion, valuing their autonomy and close-knit community above all. In pre-war Laos, the Hmong remained intact, because they lived high in the mountains and had little contact with other people. In the late 1960s, when the Vietnam War spread into Laos, the United States recruited the Hmong to fight against communism. Displaced from their villages, many Hmong became refugees in their own country. In February 1973, the Vientiane Agreement was signed, calling for a cease-fire in Laos. American relief programs ceased, and the Laos People Party declared the Hmong enemies of the state. Between 1,000 and 3,000 Hmong were airlifted to Thailand, while thousands more who had fought for the CIA or remained neutral in the war, were left behind. In 1976, the first wave of Hmong immigrants arrived in the United States.

Come and join in the tradition of ball tossing! If you've found someone you fancy, HAW is selling roses!

In collaboration with the Burke Museum, HAW brings you the "Evolution of Old vs. New". Whether, it be through traditional clothing, tools, or food, you'll be able to see the evolution of Hmong people in the gallery. In addition, the gallery is also where the winning backdrop by  Xengyeng Xiong ( Em Carter) will be for everyone to photograph with!

Meet and Greet with Alix Phom, actor, model, and influencer will take place 1:00pm-1:30pm in front of the backdrop.

Located outside of the Armory, there will be 3 food and beverage vendors to enjoy! 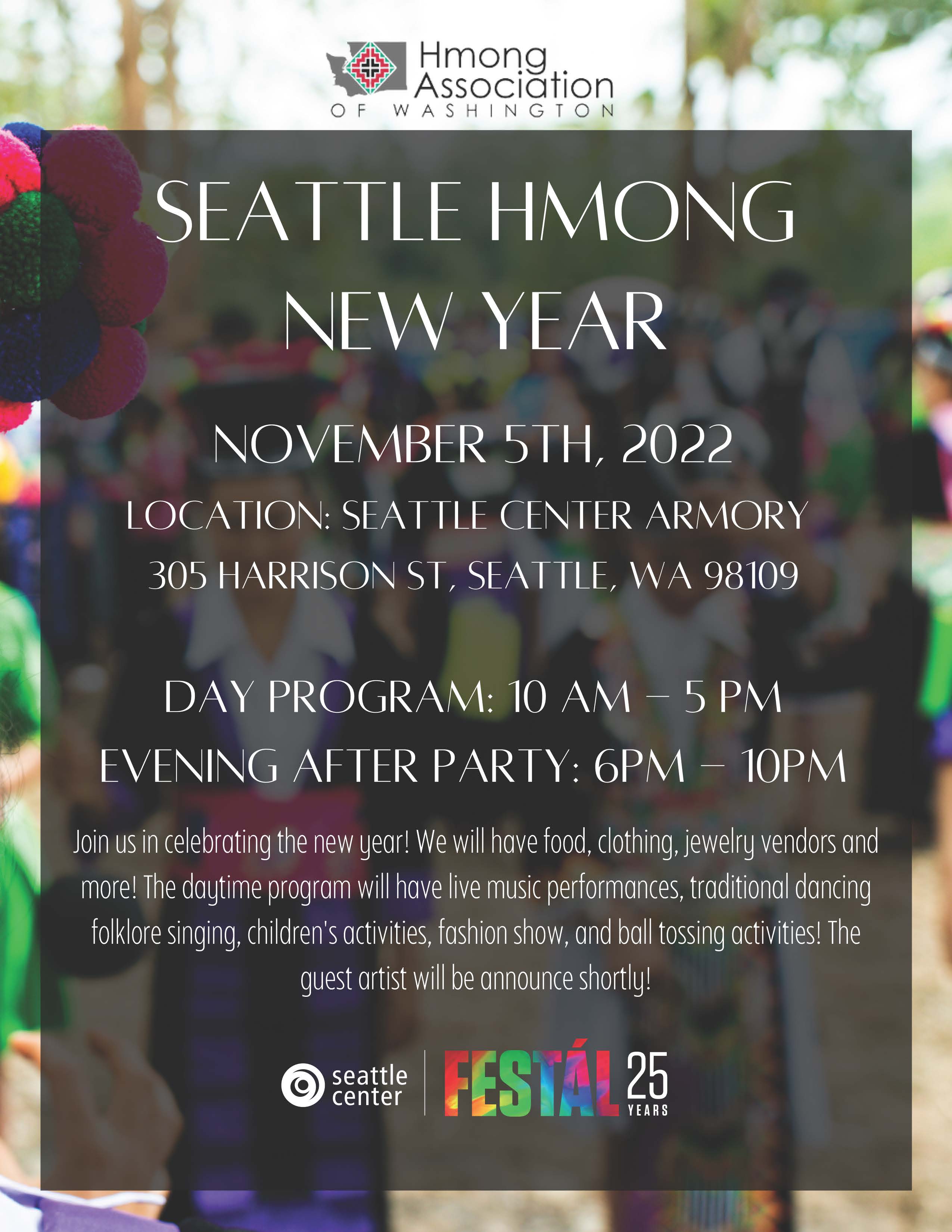 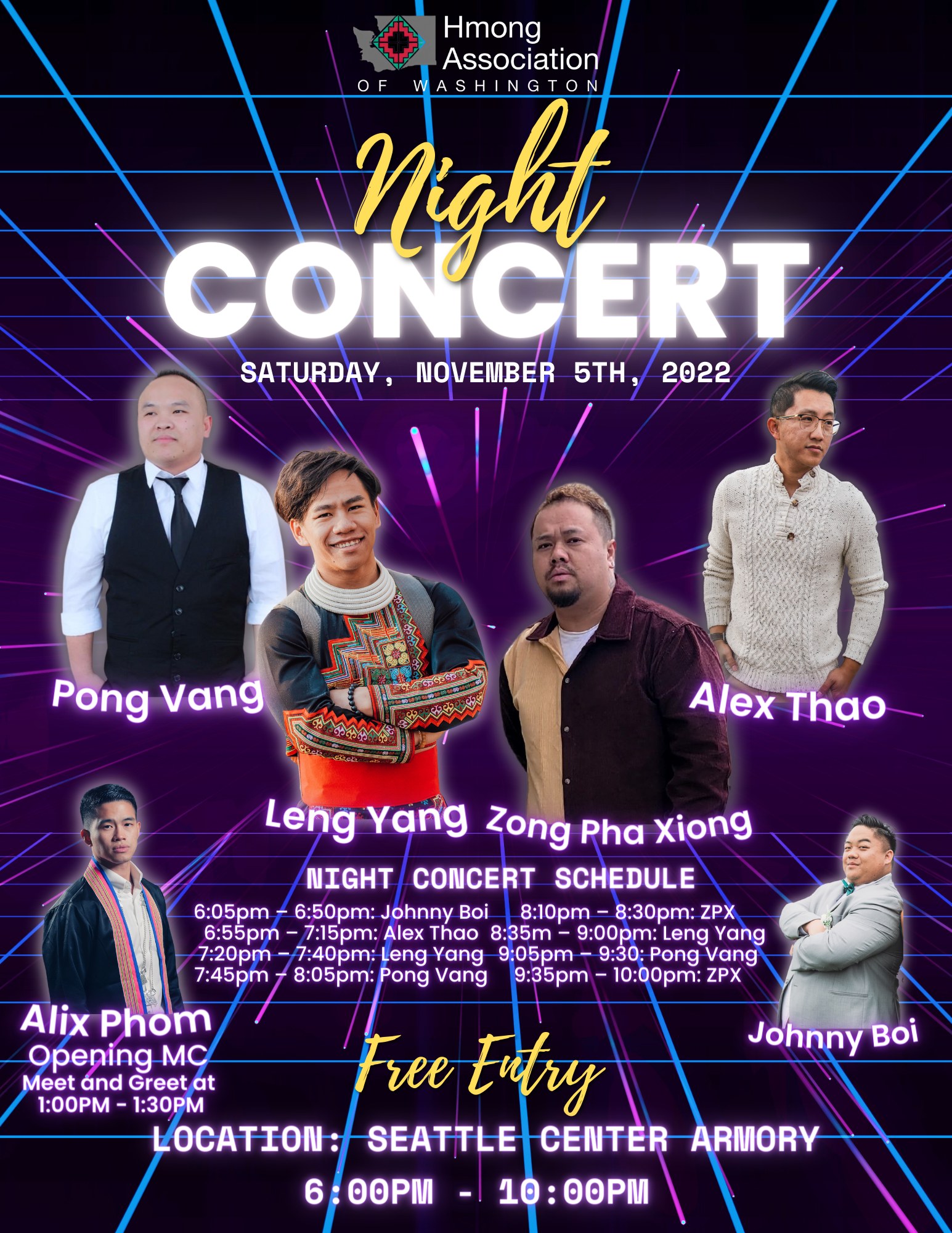 Location
Free Event
Educational exhibit celebrates the rich military history at Fort Lawton and the Buffalo Soldiers stationed there as part of the U.S. Army’s 25th Infantry.
All Day

Location
Admission Fee
We are the foremost touring trade show for, by, and about deaf people since 2003, has attracted more than 1 million attendees since. Our philosophy is that free admission brings a diversity of attendees who can share our culture, needs, language, and information.
All Day

The Boy Who Kissed the Sky: Audio Described

Location
Admission Fee
Set in the heart of Seattle’s Central District to the rhythms that shaped a generation, The Boy Who Kissed the Sky, is inspired by the early life and influences of Seattle native and musical icon Jimi Hendrix.
1:00 p.m.

Location
Admission Fee
This 2-hr hands-on workshop teaches you screen printing A to Z and is the requisite for Vera’s silkscreen studio hours & volunteer shifts.
2:00 p.m.

The Boy Who Kissed the Sky

Location
Admission Fee
Set in the heart of Seattle’s Central District to the rhythms that shaped a generation, The Boy Who Kissed the Sky, is inspired by the early life and influences of Seattle native and musical icon Jimi Hendrix.
7:30 p.m.