Seattle Center Monorail will temporarily suspend service from Tuesday, September 7 through Friday, October 8 due to construction. Service will resume on Saturday, October 9 at 11am. For more 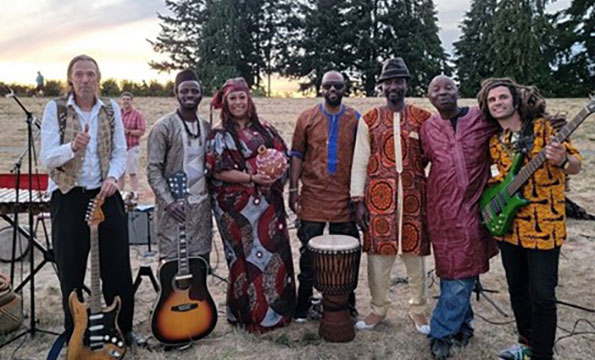 Boka Kouyaté & The Djeliyah Band is orchestrated by the multi-talented Djely Aboubacar “Boka” Kouyaté from Guinea in West Africa. Boka connects this rich traditional music to Global music; a harmonic fusion between the traditional Griot music, the afro beat and the modern Guinea music which provides a highlife sound for your listening and dancing pleasure.

The sounds and the sights of the Kouyaté Arts Performance Company is an exotic blend of awareness. The woman of the Kouyaté Dance team has a strong sense of dance culture. The live music, song and dance bring a festive and dynamic style of West African dance.

The Djeliyah Band began in February 2015 in Seattle, WA. The name Djeliyah means “The work of the Djely people in the community.” Djelys or Griots have always been next to the Kings in the Mande Empire as cultural educators, and have been the traditional historians, artists and musicians of culture.

The band has played at the Nectar Lounge, Rumba Notes Lounge, Festival Sundiata, Columbia City Theatre, The Triple Door, and during the movie showcase for “ROOTS”.

Kouyaté Arts is a subsidiary of Adefua Cultural Education Workshop (ACEW): a 501(c) (3) non-profit organization that is committed to developing and maintaining relationships with community agencies, cultural councils, school districts, scholars, parents and education-focused organizations. Adefua has spearheaded community partnerships over the past 30 years, providing cultural messages that infuse ways of maintaining and preserving African traditions.