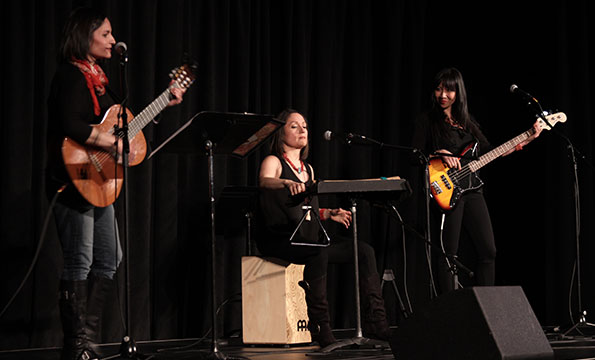 La Cantina is an all-female musical trio formed in 2014, with the mission of spreading themes of awareness, strength and social justice through music to inspire action, spark dialogue, give voice to the unheard, and build relationships and community. They are multi-cultural, multilingual and empowered women of color musicians who search to advocate and to open others to Love-in-action, as well as to entertain for a larger social purpose, through their thought-provoking and contagious music. La Cantina speaks to immigration, social justice, domestic violence, LGBTQ rights, and women’s empowerment through music, with a name inspired from the definition of the place where people come together to celebrate and share joys and sorrow. La Cantina is Stephanie Hsu, Gema Aguilar, and Sandra Aguilar out of Yakima, Washington. 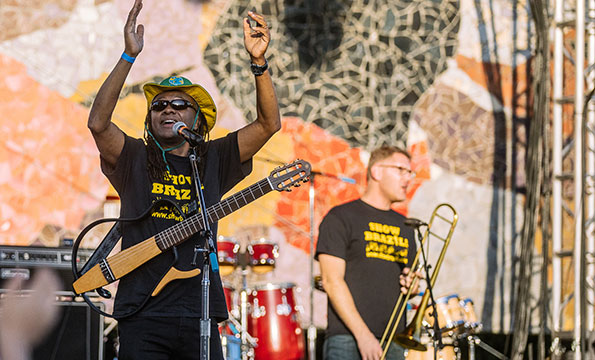 Spicy Brazilian rhythms reverberate with this internationally-acclaimed Brazilian band: The Soul of Brazilian culture in high energy performance. Show Brazil! is well known throughout the Pacific Northwest from events such as Bumbershoot and BrasilFest, and has delighted audiences in the United States, Brazil and Canada for over 20 years. The ensemble features accomplished performers under musical and artistic direction from Eduardo Mendonça, a native of Salvador, Bahia. Mendonça traces his lineage to a royal African family bearing the hereditary title of Mamabeka ("prophet of the royal court"), as documented by the Instituto Geográfico e Histórico da Bahia. Eduardo had the honor to play for Pope John Paul II’s welcome to Brazil, former South Africa President Nelson Mandela (Seattle, WA in 1999), Brazilian President João Baptista Figueiredo (Brazil in 1979), the 14th Dalai Lama (Seattle, WA in 2008) and was also featured in a Paul Simon documentary video in 1991.

Yoelin Conner (DJ Garifuna) is a Seattle-based Garifuna community leader from Santa Rosa de Aguan, Honduras. He is a founding member of the Movimiento Afrolatino Seattle (MAS) and Garinagu Houngua, two organizations devoted to the empowerment of African descent communities through arts and education.

Free Event
Seattle Center Festál presents Seattle Arab Festival in partnership with Seattle Arab Festival (SAF). The festival features traditional Arab foods, drinks, and desserts inside along with a wide array of local and national vendors with fabulous products from or about the Arab world. Visitors will also be delighted by Arabic music, singing, dancing and other stage performances.
2:00 p.m.